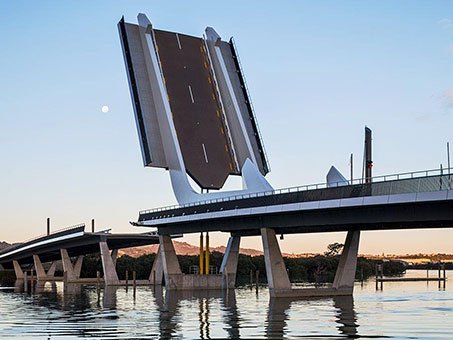 The Hatea River Crossing, which is locally known as Te Matau a Pohe, has been officially launched today by local MP Phil Heatley. The pioneering bascule bridge which opened to both cars and pedestrians last month has been launched with the aim of easing traffic congestion around the city of Whangarei. Eadon Consulting, along with a group of specialised contractors, have been instrumental in the design of operating equipment and mechanical elements featured in the project.

Speaking on the day of the opening Eadon’s Michael Thorogood said “The project has allowed the complete team to showcase their combined skills in both the design and construction of the bridge and has delivered a project that the Whangarei region can be proud of.”

Although the bridge has been fully functional for the last month, this official opening celebration, which includes a parade and flotilla, has helped showcase the bridge and generate worldwide recognition and interest.

For more information regarding our bridge design services or to discuss your bascule bridge requirements, please telephone 0114 399 0400 or contact us.