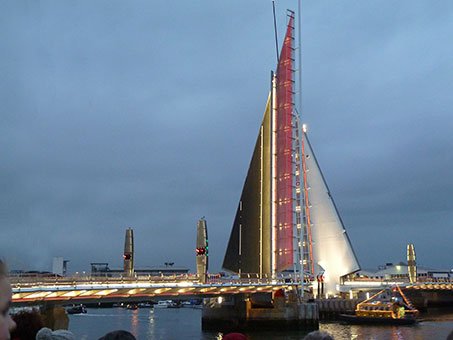 The Twin Sails Bridge, Poole Harbour has officially opened to vehicles, pedestrians and cyclists on the 4th April.

Hochtief (UK) handed the bridge over to the Borough of Poole on Tuesday the 3rd April. A celebration of the bridge was held on the 9th March during which time the bridge was officially crossed by The Mayor of Poole, Cllr Graham Wilson. The bridge was also visited by the Princess Royal on the 11th March.

Eadon staff have been involved with the project since its inception in 2002 when the competition was originally won. Eadon has helped the main contractor Hochtief Construction (UK) with the delivery of the mechanical, electrical and hydraulic equipment.

The Twin Sails bridge provides a much needed second crossing between Poole Harbour and Hamworthy. The bridge consists of two fixed approach spans with a central 19m wide navigation channel. When required to lift to allow the passage of marine vessels two triangular bridge decks, each 30m long, lift to allow an unlimited height clearance across the width of the navigation channel.

Each of the decks are lifted using two 540mm bore, 360mm rod and 3221mm stroke hydraulic cylinders powered by a pair of 132kW electrically driven hydraulic pumps. The decks are lifted through 88 degrees in 90 seconds. In the unlikely event of a cylinder failure each deck can be lifted on a single cylinder.

The operation of the new bridge is synchronised with the opening of the first bridge so that road traffic is directed to the bridge that is currently down, thus allowing marine traffic to enter and exit the harbour without disrupting traffic flow around the harbour and Hamworthy. For more information regarding our movable bridge design services or to discuss your moving bridge requirements, please telephone 0114 399 0400 or contact us.